He loves me, he loves me not… 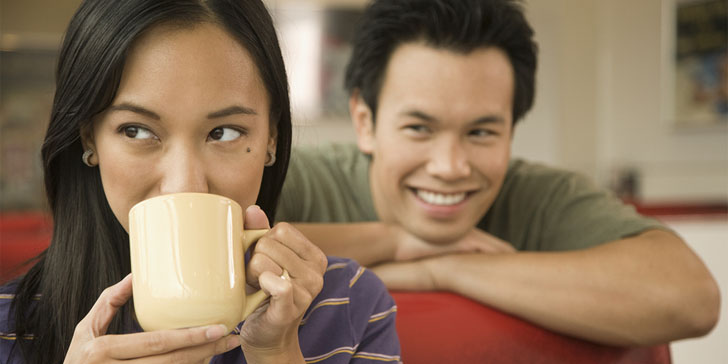 You’ve had a guy that you’ve been crushing on for awhile now, but you just can’t figure him out. Does he like you or not? Unfortunately, peeling off flower petals to the chant of, “he loves me, he loves me not,” might not be the most productive use of discovering his true intentions any longer. So what are some obvious ways you can tell? We’ve got your answers.

Most men are uncomfortable making eye contact with those around them, so often, they avoid it altogether. However, if he’s interested, he will make a very noticeable effort to be looking you in the eye. Not only when you are talking one-on-one, but also when you are talking in a group setting.

2.He Uses Your Name When He Talks

As strange as this sounds, a great way to tell if a guy is interested is how often he uses your name during a conversation. If you think about it, most of us don’t use names when we are conversing with other people. Unless of course, we are trying to get their attention. He will most likely slip your name into the conversation or say nice talking to you again, your name. It means that he likes saying your name, which is a huge bonus.

Now he might not have initiated asking you on a date yet, sigh, but he has initiated starting conversations with you. That might mean he comes over to you when he sees you in public or at the gym, or will just text you out of the blue. The honest truth is if a boy doesn’t want to talk to you, he definitely won’t talk to you. So if he has been coming around to start conversations with you, that’s a great sign. Just look at Jim and Pam. And we all know how that turned out.

Most men aren’t the best at asking other people questions during conversations, generally speaking. But, if he asks you questions about your work, family, day, etc., it could be a good sign that he wants to get to know you better.

This could also be referred to as flirting, but either way, he’s comfortable giving you a hard time. Guys are not going to tease and make fun of girls they don’t actually like, at least as a friend. If he is comfortable making fun of you, and better yet enjoys when you tease him back, that could be a good sign.

6. He Casually Touches You In Conversation

I am not saying he is trying to feel your body while you’re having a conversation, but he might hit your arm or grab your hand to make a point. Of course, it’s important to make sure that he isn’t a naturally touchy person. So observe if he is touching you more than the people around you. If he is, that’s a great sign.

7. He Hangs Out With You Often

It has been scientifically tested that most men spend time with women they find attractive. Now I am not saying that all your guy friends want to date you, but there is a high likelihood that they find you attractive in some way. Once again, if he wants to be around you, that is a good sign he is interested.

He might suddenly become comfortable telling you more personal information about himself or his family. This means that he trusts you and expects you to stick around for awhile. Make sure that you are transparent with him as well and are supportive when he confides in you.

We hope that these signs can help you to crack the sometimes complex man code. It’s important to note that sometimes women tend just to see what they want to see in someone they like, so make sure that you ask those around you if they are noticing similar things or if it’s just your imagination.

For tips on what to do on a first date, click here.