You Put The Great In Great Gatsby: A Roaring 20’s Wedding! 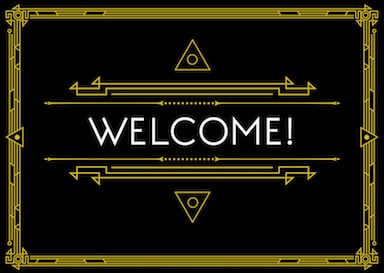 Fewer eras hold as much lush appeal as the Jazz Age, that period known as the “roaring twenties” when the champagne flowed freely and style was at its most sinfully decadent. With the ongoing allure of F.Scott Fitzgerald’s great American novel The Great Gatsby, coupled with the lavish film adaptation a few years ago, it’s no wonder Gatsby is all the rage in themed events and gatherings. These days you don’t need Jay Gatsby’s staggering wealth to host an equally memorable affair of your own, just a dash of that chic ingenuity and unabashed love of fun that was the hallmark of the period. How can you create your own? Here is a quick and easy-peasy guide to planning your own Gatsby themed wedding!

What is a Great Gatsby Theme?

In a nutshell, the 1920’s were a time of fast cars, infectious music, Prohibition-procured booze, and to-die-for fashions. Members of the privileged elite, often called the “bright young things,” celebrated their good fortune in cities such as Paris and New York, in only the best hotels, mansions, and dance halls. Hollywood was a reigning empire by that time, and starlets such as Clara Bow and Louise Brooks were sought-after style icons.

The beauty of the Jazz Age aesthetics are that it blends seamlessly with our own modern comforts and sensibilities. By the 1920’s corsets and restrictive garments had been replaced with more fluid silhouettes (thus giving rise to the now famous flapper), and the sensual and sophisticated Art Deco movement would set the standard in interior design for generations to come. 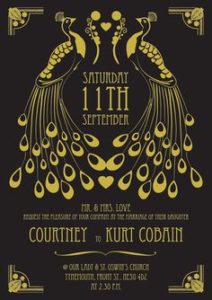 One tradition that was alive and well in the 1920’s was the carefully designed and eye-catching invitation, which preceded any social to-do or noteworthy occasion. In the novel The Great Gatsby the protagonist Nick comments on receiving an impressively embossed and lettered invitation to Gatsby’s party, which can no doubt form the inspiration for your own wedding invite.

While undoubtedly decadent, the Jazz Age style erred to the side of streamlined sophistication, sparing excessive floral embellishments even where weddings and romantic engagements were concerned. Invites were printed on smooth, heavy black and/or cream-colored paper in gold or silver lettering, with simple frame-style borders and sea shell or fan implements (if any), along with die-cut pockets to hold response cards. 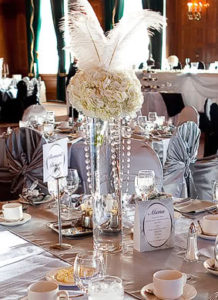 The aforementioned Art Deco style was punctuated by clean geometric lines and glamorous tones, textures, and furnishings, generally in a unified color scheme. Ebony & ivory was the classic combination of choice, followed by red & white, with the fan-tail making an appearance on chairs, mirrors, and lighting fixtures. Long stemmed lilies were immensely popular, and tall glass vases typically spilled over with calla lily arrangements.
Simple sophistication is a good guideline when planning your own interior wedding style.

Selecting a two-color (black & white, white & red, etc) palette instantly gives the reception its jazz age signature, which will be instantly apparent even to those unfamiliar with the era. When choosing floral table arrangements try to opt for lilies, white roses, and pale feather plumes in tall vases. Vintage champagne flutes, sheet music place mats, and embossed name cards in the shape of fans put the finishing touch on your Gatsby theme. If you’re looking to add some additional sparkle toss a handful of clear faux gemstones over each table (just be mindful of potential little fingers putting them in mouths!)

We finally get to the best part of the 1920’s–the fashion! Lucky for you you’ll have no trouble finding a variety of breathtaking Daisy Buchanan-inspired bridal and bridesmaid gowns, with an assortment of jewelry and hair accessories both timeless and unique to the period. 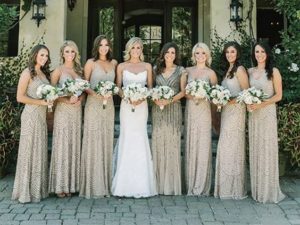 As mentioned above, women of the Jazz Age shunned the corsets and heavy bustles and crinolines of prior eras, opting instead for gowns designed to free and show off their figures. Silk, chiffon, and organza were popular materials for evening gowns, often beaded in beautiful patterns. Sleeves were kept short or flared just above the elbow, while plunging neck and back lines were not uncommon (though frequently scandalized–use your discretion!)

Bridal gowns were fitted while more casual evening dresses were formlessly fluid, with the latter’s hemline falling above the ankle while the former trailed out mermaid-style. Gatsby era brides would have giggled at the full, fluffy skirts of bridal gowns today, just as they surely turned up their noses at the even fuller skirts of their ancestors; the slinkier and simpler the better, as far as they were concerned. 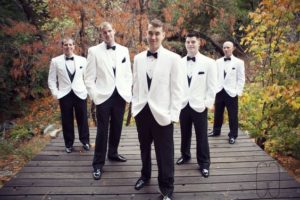 While bridal gowns carried a toned down elegance, hair adornments could be quite elaborate. Floral head garlands accompanied by cascading veils were the norm, as were intricate pearl and bead headbands and jeweled hairpieces. It’s safe to assume that women of the 1920’s were huge fans of accessorizing, taking their cues from newly adapted East Indian and Asian ornaments such as heavy earrings, bracelets, and even armbands. Plumed fans and daintily beaded and/or embroidered purses were regular accoutrements, while make up was generally applied as a smoky eye paired with bright red lips and defined brows.

It’s worth noting that menswear has changed very little in the evening wear department in terms of Gatsby vs today; expertly tailored tuxedos in shades of black, white, gray, and pin-striping were worn then as now, along with waistcoats, vests, and silken bow ties and cravats.

However lavish or subtle you choose to go, there’s no denying the timeless appeal and flat-out fun of a Gatsby themed wedding. An era that celebrated living life to its fullest and going out with a bang, the Jazz Age is alive and well in popular culture, so bring on your heartfelt flapper and get ready to say “I do” in style!