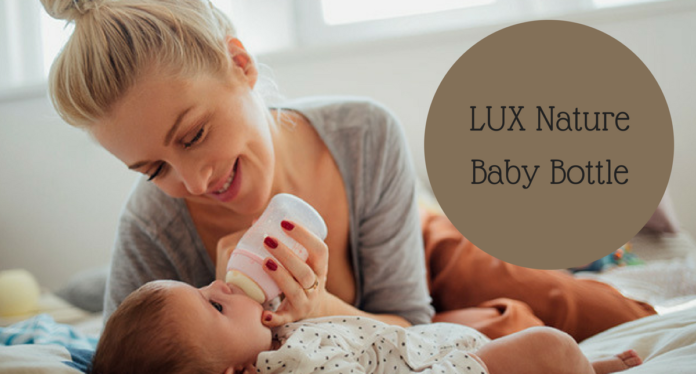 The Lux Nature Baby Bottle is a unique bottle in the baby bottle industry.  It has a squeezable, breast-like design that supports a baby’s natural mouth position and sucking rhythm.   This natural design helps, in that it makes the correct amount of milk flow come out.  A common complaint with other baby bottles are that too much milk comes out too quickly.  That’s one of the reasons that breastfeeding is best, since it prevents too much milk from coming out at once.  The maker of this bottle wanted to design a bottle to emulate a mother’s breast as much as possible.  One of the features that they added was making the nipple only release as much milk as the baby wants.

The Lux Nature Baby Bottle features a unique venting system that prevents a baby from swallowing too much air.  Too much air can lead to colic, gas, and an upset tummy.  This company wanted to cater to those mothers who wanted to offer both breast and bottle feeding options.  Often times, when a bottle is extremely different from the mother’s breast, a baby won’t accept it.  So they created this bottle to make the back and forth transition from breast to bottle easier.  It was created by a mom for her own child who wouldn’t accept other bottles.

The bottle is made from silicone which is thought to feel like a mother’s breast.  It also has a wider, softer, supple and skin- like nipple base.  The base of the nipple presses against the baby’s face much like a natural nipple from a mother would do.  The whole construction of this bottle was to not be cute looking, but to feel most like a mother’s breast.  There is no substitute for a mother’s breast for a baby.   So this company did the best that they could to make the second best thing.

Cleaning is made easy with the LUX Nature Baby Bottle because it has a open and wide mouth.  You will not need to use a bottle brush with this bottle.  The wide neck allows an adult hand to actually get in there with a dishcloth and clean the bottle.  This baby bottle is also dishwasher and sterilizer safe.

This bottle is made from silicone.  It is BPA,PVC, and phthalate-free.

The founder of The LUX Baby Bottle is a working mom of three named Lisa.  She knew after her 3rd baby that she’d have to return to work.  She had been breastfeeding and wanted to create something as close to a natural breast as was possible.  As she searched to find a bottle like a breast, she had a very hard time selecting one for her son Myles.  She deeply wanted her son to have the most natural bottle feeding experience that was possible.  As she tried out bottle after bottle, she quickly learned that her son wouldn’t accept any of them.

Lisa quickly came to grips that her son may never accept any bottle at all.  She thought about how she could possibly go back and forth from work to feed him.  She worried and stressed about if he’d be hungry as he waited for her to arrive.  The old saying goes that necessity is the mother of all invention, and it was right then and there, that Lisa decided to work on creating a natural feeling bottle.  She wanted to make one that mimicked a breast as much as is possible.

Lisa carefully studied her sessions at pumping her own breast milk out and noticed how her nipple was drawn in and out of the pump flange.  She noticed that with each pumping motion her nipple became longer.  Her nipple was making a back and forth motion.  She then designed a bottle as much like a breast and nipple as  possible.  Then she later modified her first creation.  The Lux Baby Bottles now has a soft nipple base to look and feel like a mother’s breast.  It’s sometimes the small details that baby’s crave, and Lisa didn’t want to leave anything out.

Lisa says that the bottles that she designed help prevent colic.  The bottles have a venting system that emulates a natural latch.  A natural latch is important for preventing gas, colic, and tummy troubles.

Best Features of The Product

Parents who bought the LUX Nature Baby Bottle and used it with their baby, liked it.  It seems to have a much more natural feel to it than other baby bottles.  I like that it was developed by a mom who struggled with finding her son a bottle that he would accept.  It seems like the best inventions come from mom’s who strive for something better for their children.  You may pay a bit more for this bottle, but if in the long run your child accepts it, and has less colic, then it may be worth the extra money. I hope that my review of the LUX Nature Baby Bottle can help you make a decision about what baby bottle is right for your family.

For more baby bottle reviews, check out our article, The Top 10 Baby Bottles of 2018.