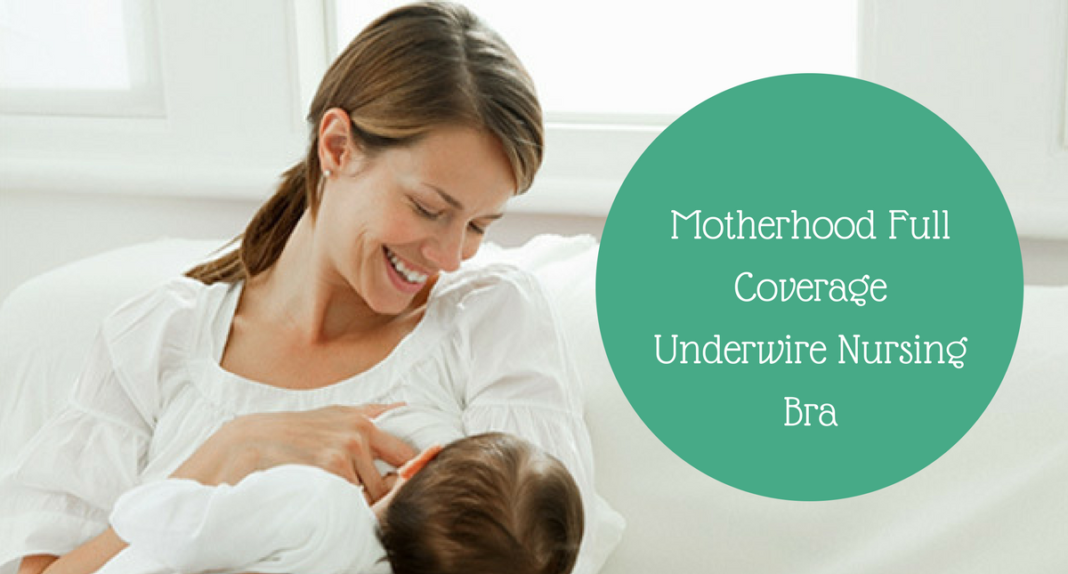 This nursing bra is made of nylon and spandex with an underwire.  It is padded and made to provide full support.

The Motherhood Full Coverage Underwire Nursing Bra had 99 customer comments and 4 answered questions on Amazon.  I've read through the feedback left by customer and condensed the results here in this review.  I hope that this helps you when shopping for a nursing bra.

I was surprised to see an underwire in a nursing bra since cup sizes can fluctuate so much for lactating women.  Some said it was comfortable, but others did mention the hard wire bothered them. Here is one comment about the underwire,

"The wire on this is huge, it sits really high and pokes me in the armpits all day, which is incredibly uncomfortable."

I read enough comments about this bra running small, that I wanted to mention to order at least 1 cup size up.  The last thing you will want to deal with, is a constricting bra when your breasts become filled with milk before nursing time.  Here is a comment on the sizing,

"Looks nice but is constricting on the tatas when your milk starts to runneth over, such as when baby is napping. Good support but not great.  Maybe will be better when my breasts shrink some and the little guy starts weaning. Order a cup size up! Or risk clogged ducts."

Material Was Itchy To Some

The nylon and spandex were bothersome to some of the women who commented.  This bra is not going to be soft or naturally breathable like cotton would be.  Perhaps, if you order this bra, you may just want it as a dress up bra for certain occasions, but not your everyday comfy bra for wearing around the house, or a day of shopping.

Here is one of the comments about the fabric,

"My biggest problem and hence only 3 stars is that the fabric of the bra is nearly intolerable for me. It is really itchy and just completely uncomfortable. I washed it before wearing it hoping that it would help. It only helped a little."

May Require Two Hands When Latching and Unlatching

Most nursing bras are made to be latched and unlatched with one hand.  The reasoning is that mothers who nurse will most likely be holding their baby in the other arm as they unlatch their bras with the other. The  Motherhood Full Coverage Underwire Nursing Bra had reports from mothers who said this bra requires two hands.  Sadly, this defeats a lot of the purpose of a bra made specifically for nursing.

Here is what one mother had to say about the latching,

"Does not fit well and the wires hurt. The clasp to hook the bra back on after feeding is somewhat difficult as well. I have other nursing bras that I can easily close with 1 hand. This one requires 2 hands which can be annoying when you're holding the baby."

Some ladies who purchased this bra in the past, purchased another because the first bra had been so durable.  The nursing bra holds up well between washings and wear.  Here is one comment on the durability,

"This has been a great nursing bra. Many of the other bras that I have bought in the past have fallen apart inside of a year. This one is going strong and is still comfortable to wear! I plan to purchase another!"

This bra is made to be very supportive.  Though many did find it uncomfortable, lack of support was not one of the categories that people were disappointed in.  Here is a comment on the supportive nature of this bra,

"My favorite. Most supportive of the many nursing bras I've tried, gives shape instead of the uniboob all the other bras give me. Underwire was uncomfortable on first few wears, but after that was fine."

The Motherhood Full Coverage Underwire Nursing Bra had mixed reviews.  Some liked it because it was durable and held up well between washings while maintaining it's supportive nature.  However, a lot of people had complaints about the comfort level.  The thick wire seemed to be the main culprit, but the materials used was also reported by some as being uncomfortable. If you do decide to buy this bra, make sure to order a cup size larger since this nursing bra does run small. I hope that my review of the Motherhood Full Coverage Underwire Nursing Bra helps you determine the right nursing bra for you!

For more reviews and information, check out our list of the top 12 nursing bras.