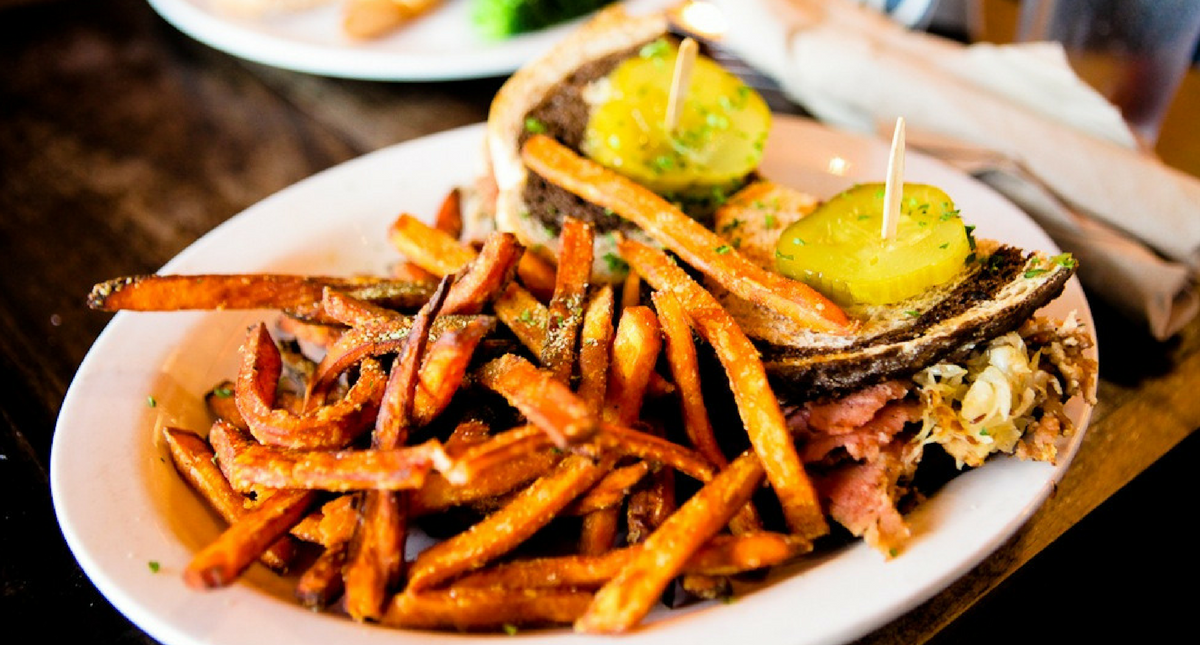 Native Foods Café was founded in 1994 in Palm Springs, California.  The company's focus is a passion for fresh food, with compassion for animals and the environment. Today, Native Foods Café is a fast-casual vegan restaurant group that has been expanding its locations. Their menu is seasonally updated with one-of-a-kind dishes, desserts, and homemade beverages.

At Native Foods Café, the food is made fresh daily. Their entire menu is 100% plant-based. The company states that they strive to create a compassionate dining experience by serving up homemade meals that are good for individuals, families, and the environment.

Native Foods has taken an earth friendly approach right down to what they use in their furniture and fixtures.  When building their new stores, they have stated on their website that they are LEED compliant and energy efficient. The lighting fixtures are made from reused cardboard and their tables from reclaimed Oak trees.  The to-go packaging is recyclable or compostable.

No GMO Corn or Soy

Native Foods says that they try to make all of the meals from in-house fresh ingredients that are "organic whenever possible."  They also do not use GMO corn or soy.

I found it interesting that the menu had a section just on proteins. With vegetarians, it is often a concern to make sure to get enough protein since animal proteins will not be consumed.  The menu stated which foods were protein rich. For example, their tempeh is created from cultured non-GMO soybeans and millet. Their seitan is made with vital non-GMO wheat gluten.  The Native chicken is made from non-GMO soy, non-GMO
wheat, and pea protein.  Their cheeses are made from nuts and a brand of cheese called Follow Your Heart Cheese.

One of the nice touches that I like about Native Foods, is that they sell double chocolate ginger cookies that you can buy and then choose an organization where you would like the profits from the cookie to go.

Others also liked the cookie charity feature.  Though I have not tasted one of these cookies, I have been reading that they are delicious.

Some People Didn't Know It Was Vegan

There were customers who ate at Native Foods Cafe without realizing that it was vegan.  This is how one customer shared her experience,

"I visited this unique restaurant over a year ago, not knowing it was vegan. Much to my surprise, I loved the food, and didn't even know the chicken wings weren't actually chicken. And now, after watching a documentary outlining the horrors of meat consumption, I've darkened the doors once again, to see if I could actually make such a drastic change in my eating habits. I am delighted to report that the Bistro Steak sandwich was so delicious and yummy, that I didn't miss the meat at all. Add the perfectly seasoned sweet potato fries to the plate, and it was in lunch-time heaven."

The prices are not expensive for vegetarian food, which can often run higher than fast food. For example, their popular Chicken Run Ranch which includes crispy, battered native chicken, ranch dressing, romaine, red onions and carrots, served on a whole wheat bun, is listed at $10.  It is more expensive than a fast food chicken sandwich, but right in line with a reasonably priced vegan sandwich.

The service set up for Native Foods Cafe is similar to Veggie Grill.  You order at the counter and then sit down at a table where they deliver it to you.  From the reviews that I read, the majority of them said that the service was good and the staff was friendly.  Of course, this will depend on who waits on you and which location you are in.  There was a small number of complaints.  The majority of people were very pleased with the service at Native Foods Cafe.

Native Foods Cafe is a fast-casual vegan restaurant chain that has been expanding its locations. Presently, it is only available in Los Angeles, Orange County, San Diego, Palm Springs, Colorado, Oregon, and Chicago. Native Foods uses fresh ingredients with no GMO Corn or Soy, along with environmentally sound practices.  The cost is higher than fast-casual non-vegan restaurants, but for vegan prices, they are right on track and not expensive at all.  The reviews show that the majority of people were happy with the food and their experience at Native Foods Cafe.  Hopefully, the company will expand their locations so that we all can enjoy this restaurant soon!

For more reviews and information, check out our list of the Top 10 Healthiest Chain Restaurants of 2018.