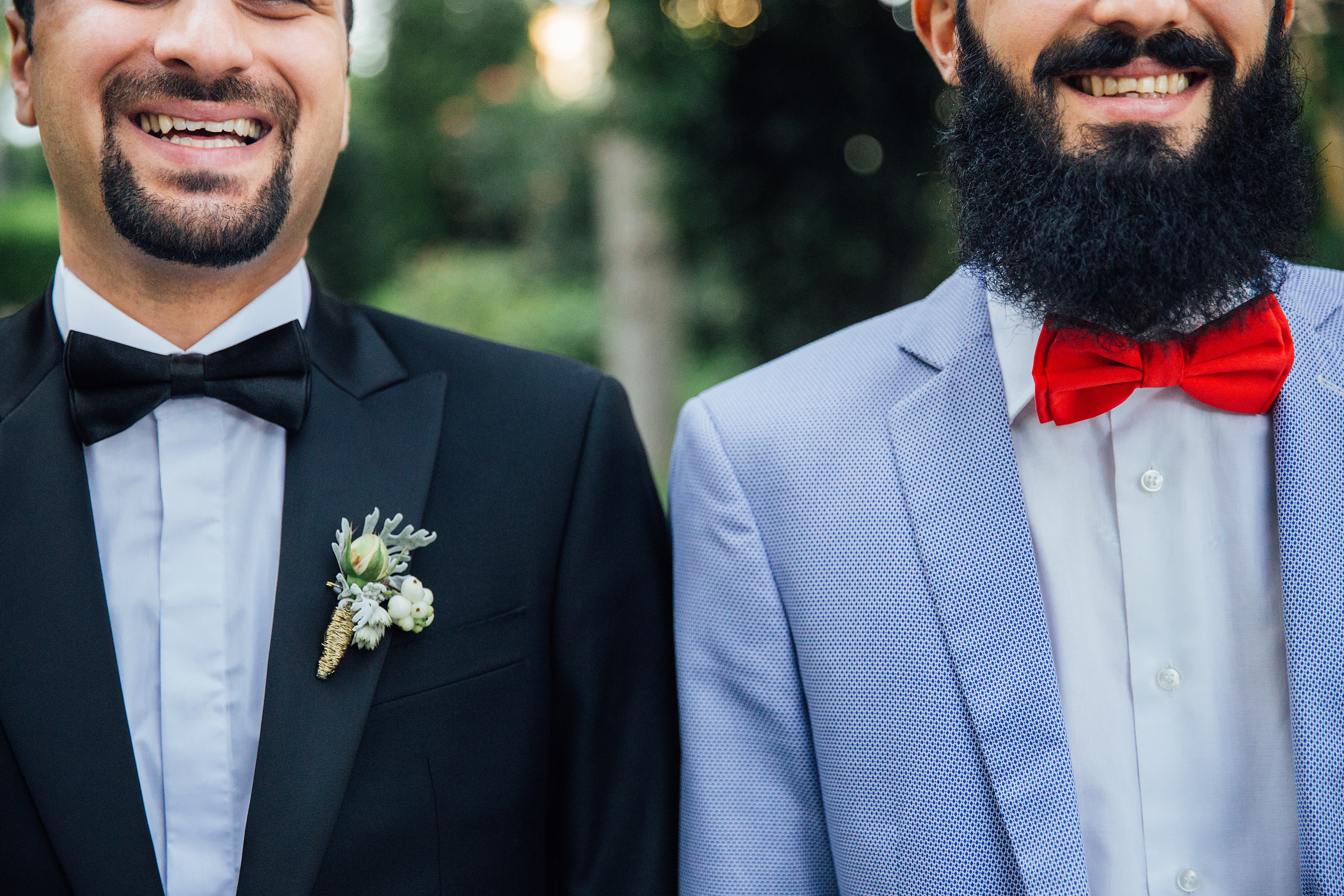 Formal events like weddings can stress you out, we all know no one wants to stand out for the wrong reasons. Reasons like picking the exact wrong outfit. Or, more importantly sometimes, the wrong accessories.

Choosing the right bow tie is no different.

For example, do you go with simple black or something a little flashier? Then, do you purchase one with a matching handkerchief or pocket square?

And, what about cufflinks, should those match too?

There are so many rules, more than you may even have known to worry about. But, the look? That’s totally worth it.

You don’t want to walk into the room and have everyone laughing at you both, and you don’t want them to be uncomfortable with the look, either.

Luckily, choosing a bow tie is way easier than you thought. Not to mention, we did all the research for you, starting with the different types of bow ties and even the history. It was pretty interesting, really.

The Way-Back on Bow Ties

In the mid-17th century, Croatian mercenaries wrapped scarves around their neck during the Thirty Years War for warmth, and some argue for fashion. This piece of fabric became known as a cravate, the French word for Croatian. And thus began the history of the bow tie.

Upper-class European men adopted the tradition and the cravat, as it later became known. The cravat flourished during the 18th and 19th centuries, making its way across the ocean along the way.

By the 1830s cravats began to vaguely resemble modern bow ties. And, you can see from the photograph of Abraham Lincoln, the transition was nearly complete by the 1860s.

The 20th century, all to way to today

Today, bow ties are mainly worn at formal business meetings. Well, and they are common at formal gatherings of heads of state. And, of course, they are standard for formal weddings and dances. But, that’s not even scratching the surface, really.

They’ve gained a nice little following with younger Americans of any gender wanting to look dapper and well put together — what is old is new again.

Classic formal weddings typically require men to wear a tux and bow tie. However, not all bow ties are the same. Bow ties come in five different styles and shapes.

You can choose your bow tie style based on your personal preference. However, the general rule is to select a bow tie that is proportional to the wearer’s face. For example, if your wedding date has a narrow face, you should choose a slim bow tie, wide faces call for — you guessed it! — wider bow ties.

The big butterfly is the largest type of bow tie as the name implies. It is slighted curved at the top. Also, it has significant downward dips at the outside corners that resemble the shape of a butterfly.

This style is the best bow tie for people with fuller faces.

2. The Semi-Butterfly – Classic and cool

The semi-butterfly is an excellent mid-sized bow tie and the most classic of the five styles. You should look for one that is about 2 to 2.5 inches tall at the outside edge.

This style is the best bow tie for a conservative look and looks good on any sized face.

The straight end is another classic option. However, this bow tie is a bit sleeker and more modern looking than the semi-butterfly.

This style is great for those with narrower faces.

The diamond point is the most modern bow tie style, complete with pointed edges on the wings.

This style is the best bow tie for narrow faces and prominent personalities. Want to make a bold statement with the bow tie choice? This is your huckleberry, er… bow tie.

The modified butterfly is an unusual styling for bow ties. For example, this style is straight across the top. However, it dips down at the lower outer corners.

The modified butterfly is awesome for narrow to medium-sized faces who want to wear something a bit more unique than everyone else at the wedding.

To Tie, or Not To Tie – Learn the Types

Traditional styling for formal events such as weddings once demanded hand-tied bow ties.

However, nowadays fashion giants such as Esquire and GQ (formerly Gentlemen’s Quarterly) say it’s okay to wear pre-tied bow ties. With that in mind, there are three main types of bow ties available nowadays.

Self-tie bow ties are bow ties that you must tie yourself. Their imperfect shapes give them an elegant and unique sense of style. Also, they are not as common now as they were in decades past. Therefore, they are great for making a bold statement.

These are the best bow ties for telling the world you care enough to make the extra effort to tie your own bow tie.

Classic self-tie bow tie designers include Charvet Place Vendôme, a high-end shirt-maker and tailoring company located in Paris, France. Founded in 1838, Charvet has produced bow ties for royalty and heads of state for nearly two centuries earning it a place in the history of men’s high fashion design.

Duchamp is another top designer of bow ties, located in London, England. Founded in 1989 and named for French artist Marcel Duchamp, Duchamp bow ties are known for their bold colors and flamboyant design.

As the name implies, pre-tied bow ties are attached to an adjustable band. Pre-tied or ready-tied, these were once considered to be a fashion no-no. However, in recent years, they have gained wide acceptance for their ease of use and fitting.

Pre-tied bow ties are available at a variety of stores and websites such as Nieman Marcus, Knottie Tie, and the Bow Tie Club.

However, when it comes to style and value, you can’t beat online companies like men’s fashion site Tieler. For example, they offer a wide selection to include peacock feather bow ties, handmade wooden bow ties, and novelty bow ties, to name a few.

Additionally, and right on target with this article, they offer more than a dozen formal bow ties designed for weddings. However, the Mantieqingway bow ties are our favorites. Best of all, the purchase includes a handkerchief, brooch, and cuff links. (All the things you need to match!)

Clip-on ties feature pre-tied bow ties attached to a metal clip that attaches directly to the collar of the shirt. However convenient they might be, they are not recommended for adults. They are, however, great for kids.

You know you want the best look possible, for you and your date. Now, you know how to pick ’em, choosing a great bow tie is as easy as hitting a great little online boutique.

First, what look best fits them? Are they sleek, unique, classic or a go big kinda person? Then, shop for a tie in that style, but don’t forget to take their tying ability (or yours) into consideration. The best for a great night without headaches is the perfect match for your date, and easy to use, too.

We do not recommend a clip-on, for anyone older than 8 or 10, it’s just not a good look.

Just remember, take the event into consideration, are they totally formal? Maybe a black bow tie is best, after all. If they’re fun-loving people though, the sky’s the limit and the ties should match their personality (and other accessories).

Please, let us know which bow tie you are considering for the wedding. Inquiring minds want to know after all! And may the happy couple’s years ahead be filled with wonder and lasting joy.

For some tips to get started, check out some of our favorite bowtie options below!