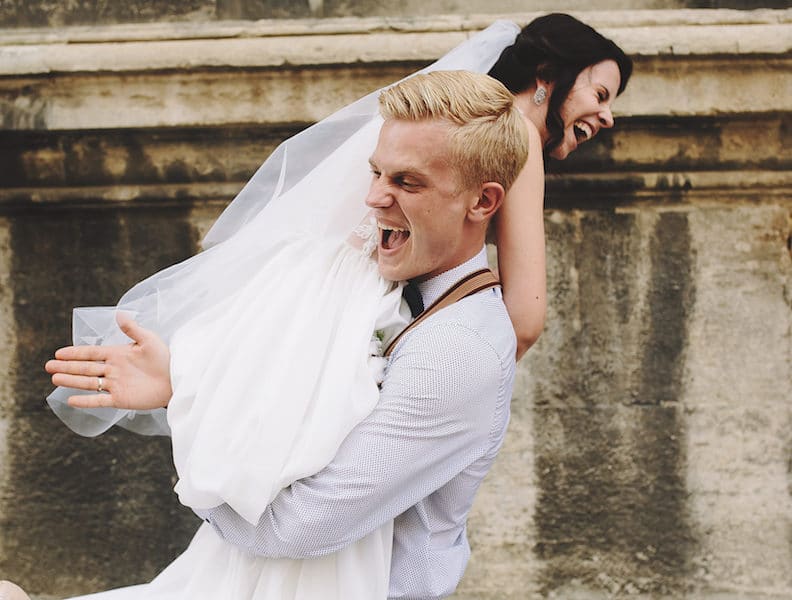 There are so many details that go into weddings that we all know and do.. but why? Have you ever thought about why we wear wedding rings? Where the idea of bridal parties came from? Or why the groom ALWAYS stands to the right of his bride. Well we have your answers, as well as some other fun random wedding facts!!!

2. The term “best man” dates back to the times when Scotsmen kidnapped their future brides. The friend of the groom who had excelled at the abduction was acclaimed to be the best man. 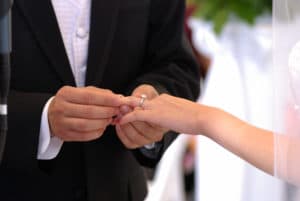 3. Engagement and wedding rings are worn on the 4th finger of the left hand because it was thought that a vein in that finger led directly to the heart. The vein was called vena amori, or the vein of love.

4. The “something blue” in a bridal ensemble symbolizes purity, fidelity, and love.

5. Saturday is apparently the unluckiest wedding day. Which is funny, because it’s the most popular day of the week to marry!

6. Seventeen tons of gold are made into wedding rings each year in the United States!

7. The groom carries the bride across the threshold to bravely protect her from evil spirits lurking below.

9.  The bride stands to the groom’s left during a Christian ceremony, because in bygone days the groom needed his right hand free to fight off other suitors.

10. An old wives’ tale: If the younger of two sisters marries first, the older sister must dance barefoot at the wedding or risk never landing a husband. 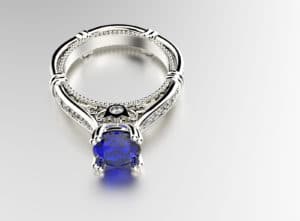 11. A pearl engagement ring is said to be bad luck because its shape resembles that of a tear.

12. One of history’s earliest engagement rings was given to Princess Mary, daughter of Henry VIII. She was two-years-old at the time.

13. In the language of “jewels” a sapphire in a wedding ring means marital happiness.

14. Aquamarine represents marital harmony and is said to ensure a long, happy marriage.

15. The tradition of the bride wearing something old (for continuity), new (optimism for the future), borrowed (borrowed happiness), and blue (fidelity, good fortune, and love) on her wedding day stems from an Old English rhyme.

16. Early Roman brides carried bunches of herbs, most often rosemary, to symbolize fidelity, fertility, and scare off evil spirits. The Greeks carried ivy, symbolizing endless love. The Victorians were fascinated with the meanings of different blooms, and they popularized the wedding rose, which represented true love.

17. Brides originally wore veils to stave off evil spirits. The veil was normally red (for defiance against evil), or yellow (for Hymen, the god of marriage). Martha Washington’s daughter is said to have been the first bride to wear white lace, covering her head with a long lace scarf for her ceremony. Her fiancé had previously commented on her beauty as she stood behind a lace window curtain, and she went with it — as well as millions of other brides. 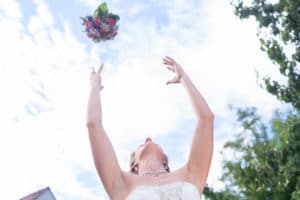 18. The Romans would break a bun over the bride’s head – the wheat promised fertility. In the 17th century, a French baker decided to frost a stack of buns -which was the creation of the world’s first tiered wedding cake!

19. The bride originally tossed her bouquet to a friend as she left the festivities to keep that person safe (the warding off evil spirits thing) and to offer her luck since getting lucky in those days meant getting married. This came to mean that the single woman who caught the bouquet would marry next. The origins of the garter toss are pretty funny – guests would literally rip off pieces of the bride’s gown for luck, so to defend herself she began to throw her garter to them! These days, the groom removes it from her leg (as innocently as possible, we’re sure) and tosses it to his bachelor pals.

20. In ancient Rome a kiss sealed a contract, so your smooch at the altar is technically legally binding. Personally I like this more romantic belief better… When couples kiss, part of their soul is exchanged.

21. In the early days of arranged marriages, the bride and groom often never saw each other at all before the wedding. Even after couples were already together before they married, it was still considered bad luck for the groom to see the bride pre-ceremony; she would not be pure and new.  Neither was the bride supposed to see herself,  it was believed that if she saw her reflection she would leave some of herself behind in the mirror. (Brides today probably wouldn’t take too well to not being able to pamper before the wedding!) These days, many couples still uphold the tradition of not seeing each other.  Others throw caution to the wind and spend time alone together to calm their nerves or enjoy the excitement together, which is now called “first look”.

22. Most women pick white wedding dresses to symbolize purity of the soul.

23. It has been said that years ago, the groom started carrying his bride across the thresh hold to keep the evil spirits from getting to her.

24. On her wedding day, actress Grace Kelly wore a dress made from 125-year old lace.

25. One of the earliest engagement rings was presented to Princess Mary, the daughter of King Henry VIII, when she was only two years old.

26. It’s called “tying the knot” because back in the early days the hands of the bride and groom would be tied together to symbolize the commitment to one another.

27. In olden times, marriage meant expansion, from building a family to increasing your assets. Rice (most likely chosen because of its availability and low cost) symbolized both fertility and prosperity, and tossing it at couples implied best wishes and good luck for newborns, good harvests, and everything in between.

28. Rumor has it that saving the top tier of your wedding cake started way back when. People normally had their first child within the first year of marriage. So instead of buying another cake, they would just use the saved top tier for their child’s christening. Clearly the tradition has changed over the years consider we now save it for the one year anniversary!

Well apparently a lot of these well known traditions came from the worry of evil spirits! Now everyone knows to stop getting married on Saturdays and to start getting sapphire in their engagement rings!